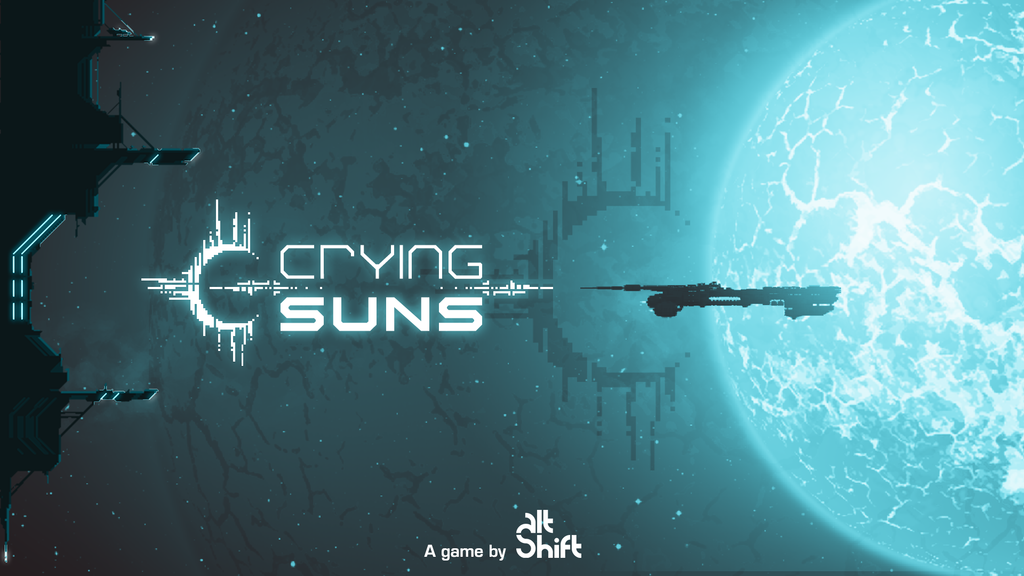 Crying Suns is a tactical rogue-lite that puts you in the role of a space fleet commander as you explore a mysteriously fallen empire. In this story rich experience inspired by Dune and Foundation, each successful run will uncover the truth about the Empire... and yourself as well. Order now the Exclusive Artbook about this game!

Latest Updates from Our Project:

Here we go! Only 27 hours before the end of our campaign (it’s the final countdown!), that is 240 % funded. Your support is so important to us!

In addition to the “Prag Mah” faction, advanced expeditions and 2 alternate endings, we will work hard to make the boss fights completely EPIC!

Next goal: the Phalanx faction !

Focus on the “Name a Star” package

As space explorers, who hasn't always wanted to discover and name a star? Well, now's your chance to name one in Crying Suns! But not only.

As you noticed in the demo, we designed several suns, with different textures and colors in order to create a specific game atmosphere. At this level of pledge, you will be able to choose, not only the name of the star but also its color, according to our art direction of course.

Besides stars, we have many other points of interest in the game as stations, beacons and most importantly planets. Of course, you could pick one of these objects to name it instead of a star, it’s totally your call :)

Don’t forget that, at this level of pledge, you will also get:

As we have almost reached our second stretch goal, it’s time to give more details about the third, which we’ve briefly mentioned in our survey. Our team is really enthusiastic about it, and we hope you will be too!

The third stretch goal is all about Boss Battles. As the Demo only shows the first sector of the first chapter, you haven’t fought against any of our weird, menacing Bosses yet. But, in the final version of Crying Suns, if you’re good enough, you’ll fight a Boss at the end of each run (every 4 sectors). And with your help, we can make these boss fights EPIC!

If we reach 60.000 € before the end of the campaign, we’ll add several features to our initial boss-fight designs:

It will be EPIC!

We did it! Thanks to your crucial help, we will be able to realize the project of our dreams, and maybe even more!

Indeed, with 18 more days to go on the campaign, we have the opportunity to go further into the depth, the quality and the uniqueness of Crying Suns experience.

Here is a reminder of the first stretch goals we planed, mainly focused on new contents such as new factions, alternate endings, the kind of extras we had to cut from our initial plans to fit into the budget:

Besides Kickstarter, Crying Suns is active on several social networks where we post regularly exclusive contents, sometimes experimental, but most of the time coming directly from the game progress. We also post shoutout about other indie projects that we really like. Don’t hesitate to come to talk to us for any reason, we answer :)

We are closer and closer to the finish line… Thanks to your support, we are now pretty confident about reaching our first goal. What a great news!

As we had (a lot of) ideas to improve the game, we are going to talk about the stretch goals, especially features that we had to cut before this campaign due to our limited budget (factions we wrote about but never showed yet, alternate endings, and many other feature improvements).

Thanks to your comments about the priorities, here is what we plan to do next:

And, one alternate ending, including:

About the new “Prag Mah” faction

The Prag Mah is an Imperial caste consisting of judges responsible for enforcing OMNI laws throughout the Empire, shutting down any unregistered OMNIs; OMNIs too human in appearance and/or behavior; and OMNIs illegally tampered with.

Orphans conditioned from birth, the Prag Mah have benefited from the best tech the Empire has to offer -- namely House Telos tech. After The OMNI Shutdown, the Prag Mah have kept their vows and continue to roam the clusters attempting to enforce these laws, harshly punishing anyone they believe to be scrapping OMNI exo-frames.

If you're traveling with an unusual, outspoken OMNI, watch out. The Prag Mah might be coming for you.

Here is an early character research on this faction:

If we reach 45.000€, we will work on an advanced version of the expedition, more immersive and with more visual elements to illustrate what’s happening. It will include:

In addition to this work, we will add another alternate ending, including:

Our first stretch goal is now funded! Thanks to your support, a new Faction, the “Prag Mah”, will be added to the game, as will an alternate ending.

If we reach 45 000 € before the end of the campaign, we will work on an advanced version of the expedition. To be more specific, here are some precisions about what we planned:

We will also work on another alternate ending, including:

We hope you like this stretch goal as much as our team!

As an indie French Studio, we are so proud to be mentioned in prestigious video games US media! Rock, Paper, Shotgun and Kotaku released articles about our Kickstarter campaign!

We also want to thank all the journalists and streamers who mentioned us and helped us spread the word about the game.

Our indie dev friends, the Black Flag Studio, achieved recently their Kickstarter campaign for Orphan Age, a dystopian life-sim game where you play as the children left behind in a cyberpunk warzone.

If we have to compare it to other games, it would be between The Sims and This War of Mine. We really like the inspirations of the game (Shadowrun, Blade Runner…), which is amazing, just like the team.

Take a look at Orphan Age and if you like it, spread the word! You can find the Kickstarter page (including a free Demo) here.

If you like the game, you can pre-order it on Backerkit.